skip to main | skip to sidebar

Our Friday:
1) Addison had a terrific day and was a wonderful car rider!
2) Avery found a deceased ladybug in the house and decided to keep it as a pet. She named it Jennifer although she said it was a boy. She carried it around and even took it outside. While up at the garden, she lost the dead ladybug. She began yelling, "Here Jennifer! Where are you Jennifer?" and searched for her for about 10 minutes. Jennifer, the deceased ladybug, was never found.
3) Something ate the corn in our garden. Two thirds of the corn was stripped back and eaten completely. Joe thinks it was raccoons. He was very upset and kept saying, "Something (animal) is going down!" which Avery found fun to repeat the rest of the night. Joe then rigged lights around the garden and prepared to "take down" the thief.
4) I went to Wal-Mart after the girls were good and asleep. I got there at about 10:45. I couldn't believe how many people were there! Mostly college kids and teenagers. A LOT OF STRANGE PEOPLE come out at night to go to Wal-Mart. I was very glad to get out of there!
5) After I left Wal-Mart I rewarded myself for being such a trooper, and Joe for staying with the girls, and indulged in some Andy's frozen custard -- peanut butter shake (thanks Amy B!) and a raspberry concrete! A wonderful snack for late at night (their open until 12:00 in the summer)!

Posted by The Collins Family at 12:30 AM 2 comments 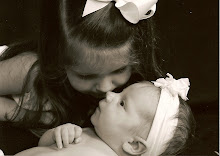 The Collins Family
We have two beautiful daughters, Avery and Addison. Avery is four and we were blessed with Addison in March. We love sharing pictures and stories about our girls!